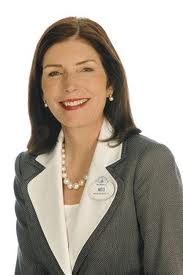 I'm trying to make sense of this big deal being made of the promotion of Meg Crofton, who was head of Walt Disney World, to now oversee all U.S. Disney Parks and Disneyland Paris (yes, including the original Disneyland). The management shuffle was announced by Tom Staggs, Chairman of Disney Parks and Resorts, who has been given high marks by almost everyone since he was put in his current job about 2 years ago coming over from the financial side of the business. The Disney fan forums (especially the large ones) lit up with comments. There were the usual Disney apologists who can see no wrong in anything Disney does until one day they wake up and realize they've been kicked in the behind by some incredibly poor decision making.  There were the pragmatists who came out with the 'let's just wait and see what this all means' attitude. And then there was the vocal group that said the sky is falling and Disney Parks (yes, including Disneyland) are heading back to the dark ages of shoddy maintenance and minimum investment in park improvements.

I'm no insider or expert on these sort of things but rest assured that Bob Iger and Tom Staggs made their management decisions based on financial reasons and what was best for corporate Disney in the long run. The worst comments made about Meg's stint as head of WDW infer that little has been done to add new new life into the park while park maintenance and its infrastructure deteriorated. Oh yes, there is that grand Fantasyland expansion going on in the Magic Kingdom but its initial announcement was met with such a yawn and expression of "huh?' that its original plans have been drastically changed.

In the underlying comments that I have read it seems that, while WDW maintained its elaborate status quo under Meg, Disneyland got the DCA Carsland expansion, Disneyland got the incredible World of Color, and the real creative park investment seems to be going out on California and not Florida (who gets a new hotel of all things). There seems to be a bit of park envy going on. Meg catches some of the blame for that. In the end, Disneyland was Walt's baby and a company icon. The corporate headquarters are up the road in beautiful downtown Burbank. And Bob and Tom live very nicely in Southern California. Remains to be seen if Meg relocates from her home in Florida to California.

We'll see how this all plays out. Let's just hope that in a few years we all don't wake up and realize we've been all given a swift kick in the pants. I guess I'm either a pragmatist (or possibly clueless).