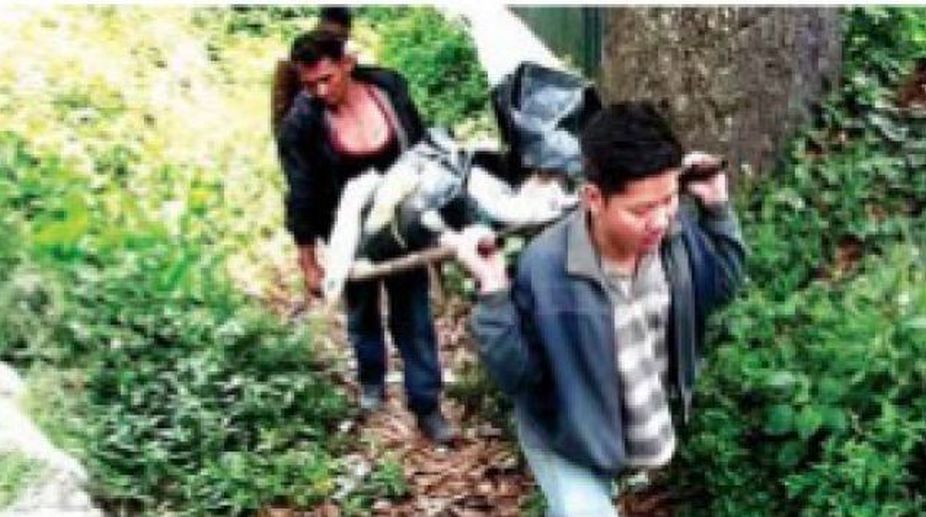 A body is being taken for re-burial after post-mortem. (Photo: SNS)SNS | Kalimpong/Siliguri | April 25, 2018: The death toll from eating poisonous mushroom in Samsing in Kalimpong district has gone up to five. Seven persons of two families in the Samsing forest compound had eaten the wild mushroom for dinner on Wednesday last.
“The sons of the two families had gone to fix their water connection nearby, while they brought home mushrooms from the nearby woods as they returned,” local sources said.
It is learnt that Navi Bhujel, 60, his wife Sheela Bhujel, 58 and their son Mandeep Bhujel, 19 died undergoing treatment in a Siliguri hospital, while Shyam Kumar Rai, 68, died on Friday, and his wife Ashamaya Rai, 61, died on Saturday.
Though their bodies were buried on Sunday, police exhumed them yesterday for carrying out a post-mortem, sources said. It is also learnt that Rai’s sons Chetan Rai, 28, and Amit Rai, 19, are in a critical condition in a private nursing home in Siliguri.
The Superintendent of the Kalimpong district hospital, Dr Ankan Simlandi, said postmortem on the bodies was a must. “Four bodies were brought to Kalimpong yesterday, out of which, two had to undergo forensic tests. However, as there is no forensic lab here, the bodies were sent to Siliguri on Tuesday,” he said.
Meanwhile, the health department said it has started campaigning in the Samsing area following the incident. The department has cautioned residents against eating wild herbs and mushrooms.
Darjeeling district chief medical officer of health, Dr Pralay Acharya, who is also in-charge of the health department of Kalimpong district, said that am experts’ team from the health department was working there.
“Seven members of two families of Samsing had eaten cooked mushrooms on 18 April and they fell ill. Some of them were admitted in the Malbazar hospital and later referred to the North Bengal Medical College and Hospital. Some died during treatment there. Five persons have died so far, while two are still undergoing treatment in Siliguri,” Dr Acharya said.Read More...