It's Good To Be Bob Iger These Days 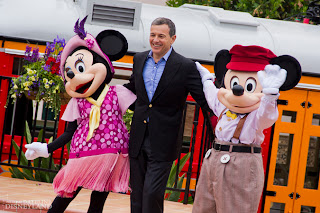 Disney Chairman & CEO Bob Iger and Friends
A MiceChat / Dateline Disneyland PhotoWhy is the man in the picture above smiling? That's Bob Iger the Chairman and CEO of the Walt Disney Company, the big man over all of it and he has every reason to be smiling.
On March 9th, Walt Disney Studios released the movie John Carter a movie that was already known to be a bomb. Iger had already called the Chairman of Disney Studios Rich Ross into his office then in a probably a stone cold business like fashion, showed Ross where the door was. Right after the release of John Carter, Disney issued a press release saying Disney would take a $200 million dollar write off for the epic failing of John Carter, the most expensive movie ever made, and a huge financial failure.
But Iger didn't lose any sleep over it even though he still had to go before his shareholders at the annual public meeting and facilitate the quarterly profits conference call with the business media. He confidently pointed to Disney's success with other aspects of the Walt Disney Company (notably the huge money maker that Disney's ESPN is along with the Disney Channel) and also held a couple of aces up his sleeve. Who else had reason to smile after releasing the biggest movie flop of all time?
May 4th, the Disney owned Marvel Entertainment and Studios releases the movie The Avengers. It becomes the 3rd highest grossing movie ever, kicking the pants off that Harry Potter kid and delivering a beat down to the Dark Knight. Only the James Cameron movies of Avatar and Titanic have made more money than The Avengers. Iger smiles all the way to bank as the movie, still in release, has made some $1.4 billion dollars and just wait till the DVD / Blu-ray release comes out somewhere around September. Yep, The Avengers, a reason for Iger to smile since buying Marvel was pretty much all his idea. Ever the standard bearer of cross-promotion, Iger is determined to get Avengers attractions in his theme parks where he his permitted to do so (sorry WDW fans, you're going to be left out on this one).
And then with hype and fanfare second to none, Iger re-opens the new and improved expanded Disney California Adventure yesterday which caps off about 5 years of planning and effort to remake the Disney Park that fell flat on its face when it opened in 2001. Yesterday the people came and came. The people will continue to come this weekend, this summer, and what Disney hopes is well into next year and beyond. It's going to be the biggest summer ever for The Disneyland Resort. More smiling from Iger. 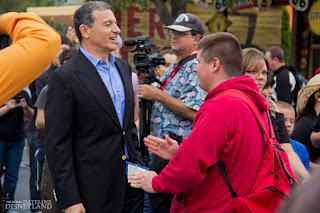 Man of the people, Iger mixes with the public at the opening
of Cars Land. A MiceChat / Dateline Disneyland photoIger along with Chairman of Disney Parks and Resorts Tom Staggs and Pixar boss (along with about a half a dozen other Disney titles) John Lasseter have been quite visible in DCA this past week, and especially for Iger, that is a sight not often seen. These guys have been like expectant fathers about to give birth to a child. Yesterday Iger, Staggs, and Lasseter were seen talking to regular park guests. Last week they were riding the rides of Cars Land along with a group of annual pass holders. Yep, Bob Iger, just like Walt Disney, a man of the people. Well, not quite. 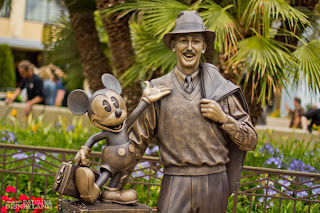 Storytellers Statue - Buena Vista St. - Disney California Adventure
A MiceChat / Dateline Disneyland Photo
The just unveiled statue of Walt and Mickey on Buena Vista Street represents Walt when he first came to California in 1923 (we'll ignore the historical fact that Mickey came along about 5 years later). According to Walt himself through interviews, he stepped off the train in Hollywood with about $40 in his pocket and a brain stuffed with imagination and dogged perseverance. I don't know if Bob Iger has $40 in his pocket. He probably doesn't need any cash at all. Through assorted compensation from Disney, Iger is estimated to make around $30 million dollars a year. Man of the people? Iger doesn't need to be. He is one smart business man. Not bad for someone who started his career in media as a TV weatherman.