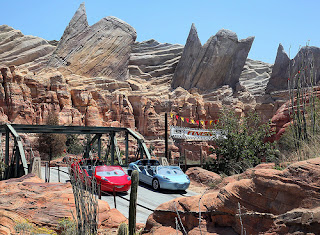 Radiator Springs Racers - Official Disney Photo
And just like that we have the first full Radiator Springs Racers complete ride-thru video this one coming from wdwinfo.com and posted to MiceChat. Disney kept photos and videos of Cars Land at bay as long as they could but with Annual Passholders paying anywhere from $75 to $500 for an early admittance and a few hours in Cars Land (benefiting Children's Hospital of Orange County) I guess they thought best to lift the photo and video restrictions that were in place for the Cast Members preview days last week.
Get ready for a very long wait to get on this ride - the best Disneyland attraction probably since Indiana Jones Adventure.

** Update **
I've added a second video that was posted to YouTube shortly after the first. The first video is from the left side track and the second is from the right side track. There is a slight difference between the two tracks inside the show building. The left side passes through Luigi's Tire Shop before entering the race track and the right passes through Ramone's Body Shop. I think the first video is better overall but the second video does a better job filming the interior show scenes.