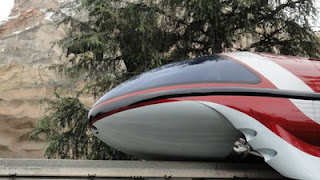 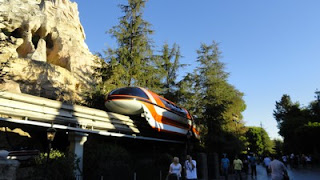 On every one of our Disneyland trips, Mrs. DisneylandTraveler and I will make a round trip on the Disneyland Monorail leaving from the Tomorrowland station. Occasionaly we will use it as transportation to Downtown Disney or for the times we have stayed at the Disneyland Hotel. But mostly we just sit back and make the round trip on the sleek looking trains. The latest versions of the monorail, the Mark VII's, are indeed impressive to look at from many vistas around the resort.
Mrs. DLT and I usually try and get the very back car (the tail). Why? Well, the front compartment with the driver (the nose) is very high in demand for families and you have a better luck getting on in the rear of the train. The other reason is that the front and rear compartments are the only train cars that actually have air conditioning since they do not have windows that open like the cars in the middle sections of the train. Air conditioning is important to Mrs. DLT. Air conditioning is important in January to Mrs. DLT.
The ride itself is kind of, well, ..... meh .... It's smooth, it's quiet but you get to see a lot of the backstage areas of Disneyland and DCA that are not all that impressive to see. Perhaps the ride highlights come when the monorail shoots through the Grand Californian Hotel property and the minute or two when it actually wraps around Fantasyland and Tomorrowand in Disneyland. It's certainly not anything to get excited about, just something nice to do. If the monorail wasn't running on one of our trips (which has been known to happen since it seems to frequently have issues of some sort or other) it would not be missed.
But lest we forget, if you are a boy (and maybe even a girl) of age 5 or 6, the Disneyland Monorail may simply be the greatest thing ever, a true highlight of a Disneyland trip for most young children. And for adults, the Disneyland Monorail is just a beautiful thing to marvel at often allowing you to recapture that moment of youth when you made that first trip. You know, for adults, a ride on the monorail may not be the greatest thing in the world but at one time, it probably was.
Here is a YouTube video that quietly gives a you round trip ride on the Disneyland Monorail.....